A Little Something to Offend Just About Everyone! 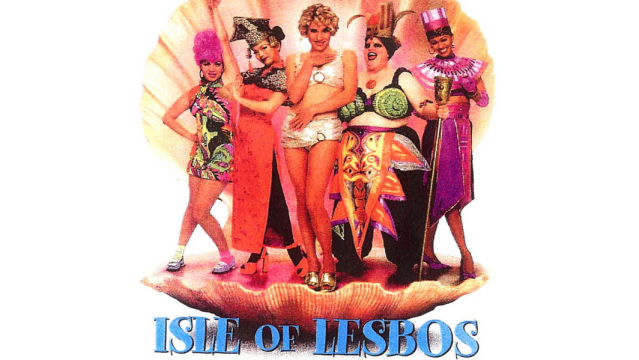 The Rocky Horror Picture Show meets Oklahoma! in this outrageous musical comedy feature - a 1940s Technicolor - style fantasy extravaganza with a modern and subversive twist. Isle of Lesbos is set in two worlds: Bumfuck, Arkansas, a one horse god fearin' town and the Isle of Lesbos, a different dimension in time and space where lesbians rule the universe.

The two worlds collide on April Pfferpot's wedding day. April, a Bible Belt beauty, is about to say "I do" to the local football hero, Dick Dickson. Instead, our heroine suffers a case of "wedding day jitters" and attempts to blow her brains out. As April pulls the trigger, she is sucked through her bedroom mirror. She materialises in the middle of a pagan ceremony on the Isle of Lesbos - a lesbian rendition of The Wizard of Oz. April is terrified, especially when she is confronted by Blatz Balinski, the Isle's beer guzzling tyrant. Though Blatz has the grace and beauty of Fred Flintstone, she eventually conquers April's heart. Back in Bumfuck, Ma and Pa Pfferpot go berserk when they find out their little April is a lesbian. Desperate to bring their daughter back, they consult Dr. Sigmoid Colon, a sinister Viennese veterinarian renowned for "curing" homosexuality. But when the doctor falls for Dick Dickson, things start to get ugly. A jilted and humiliated Dick Dickson machine-guns his way through Lesbos on a search and destroy mission until he is overpowered by "Same Sex Love". An enraged Pa launches a nuclear missile from a U.S. Government silo on his farm. Much to his dismay, it is a gay bomb that reverses course and wipes out the entire eastern seaboard of the United States. Fifteen original songs and a cast of madcap characters will have audiences of all persuasions tapping their feet. A story chock full of American family values ... Just don't bring the kids! For DVD purchases of this film, please contact publicity@journeyman.tv